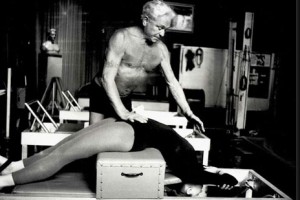 Joseph Hubertus Pilates was born in the Germany in 1880.  In 1912, Joseph travelled to England, some say to tour with a circus and others, to pursue a boxing career. In 1914, WW1 broke out and Joseph was interned in a POW camp in Lancaster. It was here that he began to develop his own exercise regime which he called ‘Contrology’.

Inspired by the springs and pulleys of the hospital beds he began rehabilitating the sick and infirm.

Pilates and his wife began teaching in New York in 1926 at a gym and by the 1930’s they had quite a diverse client base including famous people such as Vivien Leigh, Sir Laurence Olivier and Katherine Hepburn. Joseph Pilates’ skill of working with and healing injured clients became widely known and when the American ballet movement began to grow ever more popular, so did he. Dancers and choreographers would go to “Uncle Joe” to “be fixed”. It was among these dancers that the first generation of ‘Pilates’ teachers emerged.

Pilates wrote two books: Your Health, 1934, and Return to Life, 1945. Unfortunately he was unsuccessful in convincing mainstream medicine of its benefits, and he knew that he “was 50 years ahead of (his) time” but despite this the method was taking root and beginning to spread beyond New York.

What has become known simply as ‘Pilates’ is now an exercise regime that is recognized and practiced worldwide, with a count of more than 12 million practitioners. 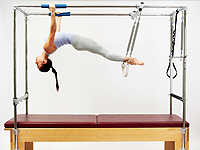 Many people choose Pilates as a means of maintenance after injury, but more importantly it is a way to prevent injury especially for athletes and dancers.  Pilates can enhance your chosen sport, increase your speed and muscle tone, increase your range of movement and improve co-ordination. Practised regularly, Pilates will improve your posture, your circulation and give you a greater sense of well being.

Many people are under the misconception that Pilates is just about stretching. Indeed your flexibility will be addressed and will improve, BUT you will also stretch your mind, increase your concentration, build stamina and work your body hard.

Pilates addresses not only the larger, global muscle groups (that tend to be primary focus in the gym for instance) but also works the smaller more intrinsic muscles which otherwise tend to be under-used. This is important for the overall balance of the musculoskeletal system.

The combination of both the Guiding Principles and Movement Principles of Pilates together with practice and commitment, facilitate changes on many levels.

Some of the attributes are:

“Logically, man should develop his physical condition simultaneously with the development of his mind. Neither should be sacrificed at the expense of the other, otherwise the all important balance of body and mind is not attainable.”